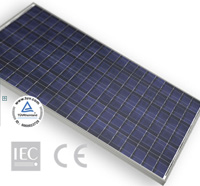 Sovello Pure Power T Series and Sovello Pure Power L Series are produced in Germany according to the highest quality standards in one of the most modern and fully integrated solar factories in the world. The modules are remarkably efficient, easy to operate, and thanks to the STRING RIBBON™ wafers, made in a way that is particularly environmentally friendly.

Sovello String Ribbon it is based on the phenomenon of surface tension. Two thin filaments are pulled to the top through by a flat crucible with melted silicon. During this process, a silicon strip about 0.2 mm thick and 80 mm wide forms between the filaments. It becomes crystalline when it cools and is then slowly pulled up so that it continually grows longer.

All production steps, from crystallization and wafering to the cell production and the completed module, are carried out in our highly automated factory located in Solar Valley, Thalheim, Saxony-Anhalt, Germany. Modules 100% MADE IN GERMANY

You can find out more about which cookies we are using or switch them off in settings.

This website uses cookies so that we can provide you with the best user experience possible. Cookie information is stored in your browser and performs functions such as recognising you when you return to our website and helping our team to understand which sections of the website you find most interesting and useful.

Strictly Necessary Cookie should be enabled at all times so that we can save your preferences for cookie settings.

If you disable this cookie, we will not be able to save your preferences. This means that every time you visit this website you will need to enable or disable cookies again.